By The Pew Charitable Trusts

Every day, state governments make decisions that affect their citizens’ lives. They determine which policies to enact and which problems to address. They establish how programs should be run and where budget dollars are best spent, as well as who qualifies for government assistance.

To effectively serve the public, officials at every level of state government are tasked with ensuring that these daily decisions are prudent and well-informed. Consequently, states are increasingly turning to administrative data collected and maintained primarily for the routine management of programs and services – such as vital records, college enrollment data, and Medicaid utilization statistics – to make strategic decisions. 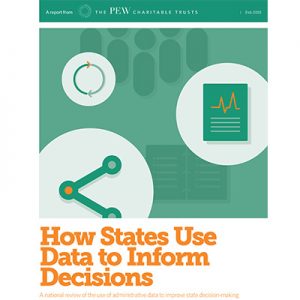 While researchers have explored the use of administrative data in various areas (for example, identifying frequent users of emergency services), little has been published on this trend more broadly. As state leaders seek to harness data in innovative ways, what common themes, noteworthy successes, and notable challenges have the 50 states experienced across a broad cross-section of issues? To address that question, The Pew Charitable Trusts interviewed state leaders across the U.S. and reviewed relevant laws, documents, and policies in all 50 states. Last year, Pew published a report that is the culmination of that research, which provided the first comprehensive overview of how data are being utilized across the country.

Its findings remain on-point and, if anything, are even more relevant today. Indeed, because of the longtime efforts of organizations like Stewards of Change Institute and initiatives such as the Institute’s new National Interoperability Collaborative (NIC), we’re all increasingly aware of the importance of sharing, analyzing and learning from data for a growing number of purposes.

States traditionally use administrative data to prepare annual reports showing how funds were spent and the impact of particular programs. More recently, they have begun harnessing existing information through data analytics – reviews to identify meaningful information and correlations. Such efforts open up critical new opportunities for governments to make effective decisions.

Such innovative uses of administrative data remain relatively rare for a broad variety of reasons, from budget limitations to the complexities of information-sharing across agencies to the need to respond to the latest crisis. As a result, there is too often insufficient bandwidth for the level of complex analyses contemplated here. Even so, the Pew study identified five key actions state leaders could take to address these challenges and maximize the value of administrative data:
Plan ahead by setting up guiding goals and structures.

The authors found states that had implemented a combination, or even all five, of the above actions in different policy areas. But no state has managed to apply these actions to a broad range of government agencies and achieve across-the-board improvements in how it develops policy, delivers services, manages its resources, and evaluates existing programs. The next frontier for state governments will be moving from the narrow, targeted use of data analytics to its comprehensive application across policy areas.